Since the start of the pandemic, more and more people have had the urge to switch things up in their homes. From decking out the new office space to expanding the living room entertainment system, there seems to be an endless stream of smart tech gadgets that can do more than the old guards.

That’s what Chinese tech giant Xiaomi hopes to achieve with its sleek Mi Smart Compact Projector, which bundles all the portable broadcasting essentials, like 1080p resolution, auto-focus and keystone correction, Android TV 9.0, and more. But ringing in at

— a fraction of the cost of

— there are bound to be some trade-offs.

I’ve been testing the Mi projector for the past month, in time to catch the NBA All-Star Game and Winter Olympics, play a couple of games on the Nintendo Switch, and do the casual YouTube streaming every now and then. While the projector is far from best, it offers a feature set that holds its ground in the mid-range market and is a safe recommendation for cinephiles on a budget. 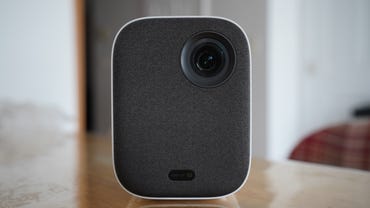 With portable projectors, manufacturers tend to focus more on video quality and less on design and build quality. That isn’t the case with the Xiaomi. The projector is surrounded with a frosted, matte-white coating and a gray, mesh fabric on the front. Porous grills are scattered throughout the media player, allowing for clearer sound and more effective heat dispersion. Together, you have an effective, minimalistic gadget that looks great on any piece of furniture.

At the back of the Mi projector are four ports: power adapter, HDMI 2.0, USB 2.0, and a 3.5mm headphone jack. Cord-cutters will be especially pleased to know that Android TV is built into the device, so streaming services like Netflix, Hulu, and Google Chromecast are available on demand. A single power button sits at the top of the projector and a 1/4-20 screw adapter can be found on the bottom. With the screw mount, you can attach the projector onto a tripod for a more flexible viewing experience. I wish the included power adapter was longer, though. My living room sofa rests against the stairway rails — where no outlets are nearby, so I’ve been using an extension cord for the added length.

The included remote control is lightweight and powered by two AAA batteries. On it, you’ll find the usual directional keys, back and home keys, volume up and down, and a voice command button to prompt Google Assistant. The light plastic remote gives off a cheap hand feel, but it doesn’t takes away from the actual projector experience.

More: Best streaming services: Get your binge on

Lastly, the Xiaomi measures at 4.5 x 5.9 x 5.9 inches and weighs about 2.8 pounds, putting it close in size to a conventional toaster. While this configuration isn’t the smallest among competitors, the Mi projector certainly packs a ton of features that makes it worthy of the “Compact” label. More on that below.

Going into this review, I tempered my expectations for the video and audio performance of a $599 projector. How good (or bad) can it be?

To start, while Xiaomi touted auto-focus and auto-keystone correction, neither of the two were able to do the job to a T — even when my room was dim at night. More often than not, I had to manually adjust the focus through the Android TV settings and tilt the projector with the my tripod. This was mainly because I was testing the projector in different rooms and in the backyard, prompting the auto-focus whenever the projector detected a displacement. The actual focus dial (controlled using the left and right remote buttons) is very granular, though, so I had no trouble adjusting the picture to my ideal clarity. This may also be a one-time thing for you if you’re keeping the projector stationed in one room.

In terms of video playback, the Mi projector can broadcast up to 120 inches at 1080p resolution with HDR10, down-scaling the footage if you’re playing in 4K or higher. 1080p is sharper than the standard 720p and 480p projectors in the sub-$600 price range, so that certainly deserves some kudos. Still, I found the out-of-the-box viewing experience to be dull and not the most color accurate, but it was nothing a few tweaks in the display settings couldn’t fix. Xiaomi gives the option to toggle between Standard, Movie, Vivid, Sports, Child Mode, and User Mode (custom settings), so I ended up adjusting the saturation, brightness, sharpness, and more until the projection looked just right.

As with all projectors, the ideal environment is one that is dark. When my living room and bedroom had slivers of light peaking through the window, the Xiaomi’s 500 lumens of brightness weren’t enough to produce a clear and distinguishable projection against the white walls. Unless the sun is down, don’t expect to be able to play a dim movie like Marvel’s Eternals.

The Mi projector’s onboard speakers sound excellent in the mids and highs, but the bass leaves much to be desired. When stationed in front of my sofa, the projector’s speakers could be heard clearly from all around, thanks in part to the spotted design of the outer shell. I found the audio experience at its finest when sitting within a 6-feet proximity to the projector, and setting the volume no louder than 60%. Anything more and I was met with a tinny and rather discomforting sound, especially during those intense action movie scenes with percussions and explosions.

Also worth noting is the audible fan noise when the device is up and running. It’s not as noticeable when you’re immersed in a movie, but can be a minor distraction during quiet scenes. For headphone users, the projector supports Bluetooth pairing, so the audio issues mentioned above can be ignored if you choose to go wireless.

Ultimately, Android TV is one of the redeeming qualities of the Mi projector. It has a simple, user-friendly interface, with plenty of digital services for your viewing pleasure. The Android TV home screen will even curate a row of recently-watched shows (similar to Netflix’s “Continue watching” feature) based on your streaming services subscriptions. You can watch movies and shows from Netflix, Disney+, Hulu, YouTube, and more through the native system platform, saving the singular HDMI 2.0 slot for when you want to broadcast external sources like a laptop or gaming console.

For $599, Xiaomi’s Mi Smart Compact Projector gives you what you pay for. It’s an easy-to-use, well-built, and affordable media player. While there are plenty of 65-inch TVs that can be purchased for around the same price, your entertainment source of choice will boil down to whether you prefer something that’s portable and can project over a larger area, or a stationary display that provides greater viewing experiences no matter what time of the day it is.

Sun Mar 6 , 2022
White label SEARCH ENGINE OPTIMIZATION & hyperlink constructing providers. Nevertheless, we do expect websites of large corporations and organizations to place quite a lot of effort into creating a great consumer experience on their website, including having helpful SC. For big web sites, SC may be one of many main […]