Apple’s tablet lineup is complete. Or at least, on the same page. Apple announced the fifth-generation iPad Air during its Peek Performance event in early March. The new Air has a beefed-up processor, new color options, 5G connectivity and Center Stage, Apple’s fancy video call feature for the front camera.

For the last five days, I’ve been testing the iPad Air, replacing my

— which is normally within arms reach at all times — with the new Air. Outside of display differences (both in size and quality), I haven’t missed my iPad Pro one bit. And heck, I imagine with another week of use, I won’t even miss my Pro’s 12.9-inch screen. 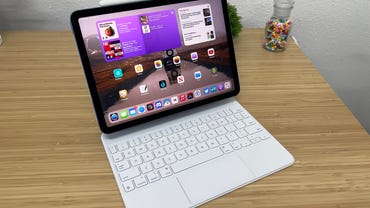 My experience with the iPad Air has been everything I figured it would be with strong performance and long battery life. And as much as I hate to admit it, there’s a touch of buyer’s remorse thrown in.

A few years ago it felt as if Apple had all but forgotten about the iPad Air. But in 2020 we saw a fresh new design come to the fourth generation iPad Air. Just 18 months later, Apple has once again updated the iPad Air. Only instead of a complete design overhaul for the fifth-generation Air, this year’s update focuses on performance.

That means the outside of this year’s iPad Air looks identical to the 2020 model, save for new colors. The iPad Air now comes in space gray, pink, purple, blue and starlight.

Whether you’re looking for a tablet to stream videos or to replace your laptop, here are some compelling options.

The iPad Air still has a 10.9-inch Liquid Retina display that reaches nearly edge-to-edge. There’s a new 12-megapixel ultra wide FaceTime camera centered at the top of the screen.

After Apple released the ninth-generation iPad, the iPad Air was the only tablet left in the lineup that lacked Apple’s Center Stage feature for the FaceTime camera. The new iPad Air gains Center Stage, which uses the wide-angle camera to keep you in the frame of video calls in FaceTime and third-party apps like Zoom. It’s a handy feature to have and use, and one I’m sure iPad Air owners will find convenient as well.

On the right edge of the tablet are the volume up/down buttons and a space to store/charge a second-generation Apple Pencil.

If you opt for a cellular model, you’ll also find a nano-SIM card tray on the right side of the iPad Air. You don’t have to use the SIM tray, however, as the Air supports eSIM technology that allows you to set up service with your carrier of choice with the tap of just a few buttons. The iPad Air now supports 5G cellular connectivity, but not mmWave, only the slower Sub6 standard. Don’t be discouraged, though. Just like with the new iPhone SE, the lack of mmWave isn’t a dealbreaker due to the lack of widespread rollout and issues with signal interference.

As with the last refresh of the iPad Air, for the first day or so I missed my iPad Pro’s Face ID unlock method, but as I sit here writing this review, my muscle memory is already reaching for the top button to unlock the iPad Air or authenticate my password manager.

For charging and syncing the iPad Air, there’s a USB-C port on the bottom of the housing. Apple opted to not include Thunderbolt 4 capabilities in the iPad Air’s USB-C port, even though it, in theory, would support it. Instead, you can expect up to 10Gbps transfer speeds when doing things like offloading photos or videos from a digital camera, as well as output up to 6K when connected to an external monitor. Thanks to the speed boost of the USB-C port, the iPad Air is compatible with Apple’s

On the back of the iPad Air is Apple’s Smart Connector for use with one of Apple’s keyboard accessories, like the

. Also located on the back of the Air is a 12-megapixel rear camera.

had the tagline of “Peek Performance” and for good reason. The

, according to Apple, is the most powerful Mac in its lineup. The

uses the same design as its predecessor, but has brand-new internals that makes it just as powerful as the

. The new iPad Air takes the same route the iPhone SE took, using the same design as the 2020 iPad Air, but with a big increase in performance thanks to Apple adding the M1 Apple processor.

Apple’s Mac lineup can be confusing as the company transitions from Intel processors to its own Apple Silicon processors. But we’re here to help.

It’s the same processor that Apple debuted in the MacBook Air, MacBook Pro and Mac Mini to begin the transition from Intel processors to its own Apple Silicon processors. Last year, Apple added the M1 chip to the iPad Pro lineup, and now it’s trickled down to the iPad Air.

The fifth-generation iPad Air comes with 64GB for $599 or 256GB of storage for $749. I don’t understand the reasoning for starting the iPad Air at 64GB of storage. Maybe Apple has usage stats that show 64GB is more than enough for this price range to justify it. Or maybe the sales pitch is that if you need more base storage, then the iPad Pro is where to look. Either way, 64GB of storage feels like it’s just not enough space, especially if you have an Apple One subscription that provides access to the Apple Arcade, Apple TV+ and Apple Music catalogs.

Like I did with the new iPhone SE, I ran the Geekbench 5 benchmark app on the new iPad Air to compare its performance to the 2021 iPad Pro. Mind you, benchmarks aren’t the only way to gauge a device’s performance, but they provide a baseline of what you can expect on a device. Geekbench 5 on the iPad Air resulted in a single-core score of 1,701 and a multi-core score of 7,137. I ran the same test on my personal 12.9-inch iPad Pro with the same M1 processor with 16GB of memory, compared to the iPad Air’s 8GB, and the scores were much closer than I anticipated. The iPad Pro scored 1,708 for single-core and 7,297 in the multi-core test.

To see how it compared to the competition, I ran the same Geekbench 5 tests on the

But, as I said, benchmarks aren’t everything. My real-world use has mirrored that of my iPad Pro. Apps not only load fast, but there are no performance issues while multitasking and using more than one app at a time.

Performance isn’t an issue with the iPad Air (or iPad Pro). However, the limiting factor for what a person can or can’t do on the tablet turned hybrid-laptop is iPadOS itself. It’s the same story that’s been written countless times over the years, but it’s getting shorter. Apple has made great strides in building out the tools that iPad power and casual users have been asking for since the transition to iPadOS. But as the company continues to increase the performance of the iPad to be equal to the Mac lineup, the expectations — right or wrong — increase as well.

That said, the iPad Air, with iPadOS 15.4, is fully capable of replacing a laptop for a lot of people.

As far as battery life is concerned, the iPad Air’s battery lasts just as long as my iPad Pro. That means I can get a full day of use out of it if it’s my lone computer for the day, or I can stretch it a few days if I’m jumping between computers and my tablet.

and $299 for the Magic Keyboard. That’s $1,027 to buy everything you’d need to convert the iPad Air into a 2-in-1 device, with just 64GB of storage. For some that’s sure to be enough space, but not for everyone. The base storage model should be 128GB, and it’s unfortunate that’s not the case.

But, really, the base storage is my only gripe with this year’s edition of the iPad Air. It’s as powerful as the iPad Pro, but costs hundreds of dollars less — even when you max out the storage — with a display that’s on par with the 11-inch iPad Pro.

If you’re in the market for an iPad, and the base model and

aren’t enough for you, the iPad Air is where your search should begin, and most likely, end. The more Apple pays attention to the iPad Air, the less the 11-inch iPad Pro makes sense to me.

Sun Mar 20 , 2022
Improve and monitor your website’s search engine rankings with our supercharged SEARCH ENGINE MARKETING tools. The time it takes for this to occur (at Google’s finish) leaves quite a bit to be desired in some niches and time is something Google has an nearly infinite provide of compared to 99% […]