is the company’s biggest smart display yet. With a 15.6-inch display, you can do all of the standard Echo Show-like tasks, but with more screen real estate. These tasks include watching step-by-step instructions for a new recipe, watching videos on YouTube or Amazon Prime Video, or asking Alexa to tell your kids a joke. 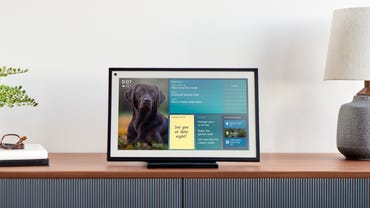 For the past month, I’ve had the Echo Show 15 up and running, both in a family setting and in my home office. It’s been a tool I use for quickly checking my daily agenda and for checking on camera feeds from time to time. While I’ve found it useful, there are still some areas that need some work.

A small TV or a very big smart display?

Setting up the Echo Show 15 isn’t a long or difficult process. You’ll connect it to your Wi-Fi network, sign in to your Amazon account, and you’re up and running a few minutes later. That’s the easy part, but there is an aspect of the initial setup that can feel daunting: Where do you put the 15.6-inch display?

Included in the box with the Echo Show 15 are the required parts and pieces to mount the screen on a wall, or you can opt for a

Personally, I wish Amazon included the stand with each Echo Show 15 instead of selling it as an add-on. You have to be really committed to your smart home setup to drill holes in your wall and permanently mount the Echo Show 15.

The Echo Show 15 can be configured for a landscape or vertical orientation both if you mount it or use the stand. Amazon included the stand with my review unit, so that’s what I’ve been using for testing.

In landscape orientation, the Echo Show 15 is 15.8-inches long, 9.9-inches tall, and 1.4-inches thick. Amazon’s store listing for the Echo Show 15 lists the weight at 78.1 ounces, or around 4.88 pounds. If you decide to mount it on your wall, make sure to follow the instructions and take all of the proper precautions to keep it in place.

Amazon’s quad-core AZ2 Neural Edge processor powers the Echo Show 15, and there’s a 5-megapixel camera in the top-left corner of the device. There’s a physical switch just above the camera that you can slide over to cover the camera. That same camera is what’s used for Amazon’s new Visual ID feature (more on this in a minute) and for any video calls.

Above the camera is where you’ll find a few buttons to control volume levels and turn off the always-on microphone.

The camera leaves a lot to be desired in terms of photo or video quality, but it’s good enough for casual calls with friends and family members.

I can’t decide if it’s better to view the Echo Show 15 as just the right size of a modern take on a small TV for the kitchen, or if it’s just a really big smart display.

A hub for your family… or not

For the first couple of weeks, I had the Echo Show 15 on my kitchen counter in an attempt to use it as a central hub for my family. I connected my iCloud calendar to my Alexa account, so the Show 15 could surface appointments and events in our shared family calendar.

It quickly became apparent that I was the only person in my family actually using the Echo Show 15 — outside of a few random Alexa queries from my kids.

Eventually, I moved the Echo Show 15 into my office where I could glance at the calendar widget to see the next item on my agenda.

The basic layout of the Echo Show 15’s interface has rotating information on the left side of the screen, with the right side showing any of the widgets you’ve added. As of right now, there are 22 widgets to pick from. Out of those 22, only the Cookpad widget that displays popular meals is made by a third-party developer. The rest of the widgets are made by Amazon and show anything from shortcuts to your music accounts to delivery updates to your calendar.

Also: The best Amazon Echo: Which device is right for you?

I’d love to see more widgets from third-party developers, like an Apple Music or Spotify widget, or even a Ring widget with snapshots from my outdoor cameras.

During the initial setup, I activated Visual ID just for my personal Amazon account (as opposed to my entire family) on the Echo Show 15. The process takes a few minutes, and it’s similar to activating FaceID on an iPhone. The Echo Show 15 needs to scan and register your face, all of which is done locally on the smart display itself.

None of the information leaves the device, according to Amazon.

Once a face is registered with Visual ID and the Echo Show 15 recognizes you as you walk up to or past the screen, it will automatically change the information that’s on the screen, tailoring it to whoever is near the display. For example, as I walk up to the Echo Show 15, my personal calendar is displayed, as well as news suggestions based on my past interactions with the device.

You can set up Visual ID for all family members linked to your Amazon account, including your kids. In the case of turning it on for kids, the Echo Show 15 will change the interface to a kid-friendly experience.

Visual ID is also available on the

, and, for me at least, it’s become a must-use feature on the Echo Show 15. Knowing that whenever I’m interacting with the Echo Show 15 the information that’s presented is specific to me and my interests solves a problem I’ve long had with smart displays. That is, seeing random suggestions and content that is of no interest to me, or whoever is using the Echo Show at that time.

Performance can be hit or miss

My biggest complaint about the Echo Show 15 is the sporadic performance slowdowns. There are times when swiping down from the top of the screen to reveal the shortcuts menu takes a second or two, while other times it’s instantaneous. The same goes for tapping or swiping through different menus. I waited at least 30 seconds today for the list of available widgets to show up when trying to navigate to the gallery. As soon as I went back to the home screen and returned to the gallery, it took no time at all for it to load.

There’s also often a delay when using the new picture-in-picture feature that lets you view any compatible security cameras (Ring and Blink are both supported).

At one point during my review, I asked Amazon PR about the sluggishness of the display. I was tasked with providing specific examples, so I decided to just take a photo of the issue. However, over the course of the next five minutes — while filming — I was unable to get the Echo Show 15 to slow down at all. Everything was quick, responsive, and worked as I would expect.

What’s frustrating about the Echo Show 15’s performance is that there’s zero rhyme or reason about why it slows down. It just does, and then it doesn’t. I did notice there have been a couple of software updates for it since I first set it up, so it’s possible that Amazon is slowly boosting performance and eliminating bugs that I’ve encountered.

Whether or not you should get the Echo Show 15 comes down to how invested you are in Amazon’s ecosystem of Echo products and services. For someone who has a lot of smart home devices that are tied into Alexa for automation, routines, and the like, the Echo Show 15 makes a lot of sense.

For someone who is heavily invested in Google Home or

, I’m not sure the Echo Show 15 makes sense. Granted neither of those companies have a comparable product — save for the

— but this can be said about any Amazon Echo product.

I definitely see the need and value of a large smart display like the Echo Show 15 for organizing a family, keeping tabs on your smart home gadgets, and even watching live video feeds of your cameras. With the addition of Visual ID, impromptu interactions are more personal and more efficient.

Thu Jan 27 , 2022
In the earth of operating from house, you are probably to have two devices that you function from: The corporate supplied official unit that you really should be using for function and your residence device that you use after hrs, or alternatively, do as a lot perform as doable on. […]